They are living in self-denial, stonewalling reality.

Hate proliferates in geometric progression, it’s pace accelerating if the opposition to its virulence is fragile. The world is getting increasingly polarised as many right-wing fundamentalists assume violent manifestations intoxicated by the rage fuelled by their favourite demagogues. There are no boundaries. There are no limits. Irrational nonsense skillfully camouflaged is sold to susceptible audiences. Fake news circulates with frenetic velocity. Everyone lives in their own echo chambers. It is a palpable freefall, as we descend into a black hell.

Sane conversations bereft of ideological prejudices are nigh impossible. Chaos reigns as the hitherto concealed bigotry suddenly surfaces. I experienced this first hand recently in my XLRI (batch of 1984-86) WhatsApp group. I am assuming that the average age of this august group (most are successful entrepreneurs or are comfortably ensconced in corner rooms) would be around 55.

I suspect the majority are well-heeled Non Resident Indians (NRIs), many in Donald Trump’s Make America Great Again, whose patriotic passions find a catharsis in pop-nationalism events at Madison Square Garden. Whatever floats your boat, my friends.

I admit to being deeply disturbed by the horrific gang rape of the innocent eight-year-old child in Kathua, Jammu and Kashmir, and the plaintive cries of justice of the sexually abused woman in Unnao, Uttar Pradesh who endured the nightmarish experience of seeing her father being battered to death in police custody, even as law-abiding officers sniggered.

In India, despite there being a robust law with severe punishment for the guilty that followed the Nirbhaya tragedy of December 2013, there has been no let-up in incidents of sexual assault. In fact, the numbers are staggeringly high and getting increasingly worse.

But what made the Kathua and Unnao sexual barbarity deplorable was that the ruling Bharatiya Janata Party (BJP), in both Jammu and Kashmir and Uttar Pradesh, was brazenly protecting the alleged perpetrators of the crimes. Its own legislators were either directly involved or were supporting the diabolical criminals. It was an outrageous contravention of basic political civility; the lawmakers were hand in glove with social anarchists.

Prime Minister Narendra Modi maintained an intriguing, stoic silence. Indian politics has witnessed several nadirs, this one was a wretched blow. It was sickening.

I wrote a piece condemning the terrible insanity and posted its link on the XLRI WhatsApp group. Since the group had witnessed several acrimonious wars between the seemingly liberal (which creative chauvinists had branded as the Limousine Lutyens’ liberal) and the diehard fanatic (which I preferred to call the loony Alt-Right), it was generally agreed upon that we would maintain the phony façade of camaraderie, conviviality and much love by making political confabulations a taboo. Frankly, I thought that itself was ad absurdum. This was a group of adults where some had deep-seated ideological positions, diametrically and vehemently opposed to the other, as expected.

I occasionally argued back, only to discover (what I had already known) that arguing with the hardliners was like putting lipstick on a pig. Perfectly normal discourse you would say, but many felt that the animated outbursts were a transgression of the group’s otherwise anodyne, antiseptic atmosphere. For them, campus buddies in the virtual world alumni network (albeit, barring a few, one barely had more than a casual acquaintance with most) was that sacrosanct buffer that could not be rocked by a politically-charged maelstrom.

Friends bickering over Trump-Clinton, Narendra Modi-Rahul Gandhi, the liberal-right, secular-conservative was deemed an apostasy. It was cold peace. My Kathua and Unnao article broke the fragile truce. 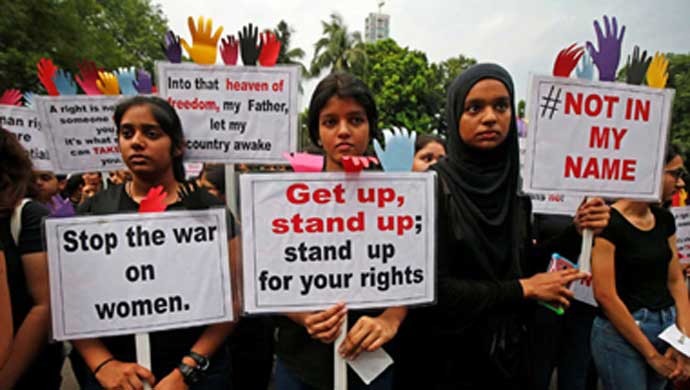 There has been no let-up in incidents of sexual assault. Photo: Reuters

I had maintained the group’s informal understanding, no politics, for several months, and not posted a single of my weekly pieces. But the Hindutva sympathisers frequently trespassed that proscription, posting provocative WhatsApp forwards akin to a Twitter troll’s phishing attack. Theirs was a hate-fuelled Hindutva marinated with some pseudo-intellectual sophistry.

They were met with quiet acquiescence; no one really objected to those dodgy entries.

Within moments of my article on Kathua, one of the #ModiToadies sarcastically insinuated that I was exploiting the group for political campaigning. It was ludicrous rubbish (I have bigger fish to fry, I told the poor sod. And I deal with enough vicious hamsters on national television).

But for him (and his vocal/silent supporters) the rape of an eight-year-old girl by eight men was not worthy of a WhatsApp group of India’s crème de la crème baby boomers, whose children were probably studying in Ivy League schools. That India’s dastardly crime was later to have the IMF managing director Christine Lagarde publicly castigate Modi over increasing sexual abuse of Indian women left them unmoved. That India’s top 49 civil servants called it “ the darkest hour in post-Independence India” was no big deal. It was appalling; the incandescent silence of the liberal class within the Class of 1984. It was sad. It was tragic. It was meek surrender. It amazed me that no one cared. This was not politics, it was about our society, our community, our future. I wonder if their own children would endorse that moral ambivalence. Maybe a look in the mirror might help.

There were many progressive liberals from our batch who had quit the group at the zealot’s toxic, poisonous divisiveness, a microcosm of the larger national narrative. The liberals had turned a blind eye, happy that at least they had perhaps preserved the group’s membership.

It is a pathetic compromise shorn of moral courage for maintaining a synthetic collegium. They are living in self-denial, stonewalling reality.

XLRI is a great institution and has certainly shaped us somewhat. But clearly, courage of conviction is “what they don’t teach you” at XLRI and am sure, even at Harvard Business School.