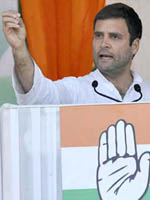 ·        There is no difference between the Trinamool and theleft, says Mr. Rahul Gandhi

·        Only TMC workers benefit under the West Bengalgovernment

·        West Bengal government calls itself a government of thepoor, but it does nothingfor them

·        Funds for MNERGA not utilized, Right to Food notimplemented in the state

Accusing the local government ofstalling the progress of the state, Congress Vice President Mr. Rahul Gandhisaid that the Trinamool Congress has failed to live up to the expectations andhopes of the people of West Bengal.

“We worked with the TrinamoolCongress, hoping that theywill remove the Left Front from the state and bring a development-oriented government. The red flagwas replaced by the green flag, but the ideology is the same, the work is thesame,” he said at a massive rally at Debra, West Medinipur.

Mr. Gandhi added that theTrinamool government has worked only for the benefit of its workers, while theothers, especially the poor and the weaker sections of the society, continue tolanguish.

“Mamta Ji talks about the poor, but does nothing for them. Wesee the same degree of corruption as we saw under the Left rule. There are manyscams happening in the state, including the much talked about Sharda scam. Inanother scam, instead of giving the job of primary school teachers tothose  who were qualified, the localgovernment gave it to TMC workers. Nearly 20 lakh people bore the brunt ofthese scams. Only TMC workers benefit under the West Bengal government. If theCongress protests, our workers get beaten up by TMC people,” he said.

He also dismissed Trinamool’sclaims that not enough money was being sent by the Centre to the State Government.

“We sent five times more moneythan the NDA did. It is sad and disappointing to see MNERGA not beingimplemented properly in the state. The Congress-led UPA government sent moneyto the West Bengal government, but the funds lie unutilised. The money does notreach the poor and weaker sections…We gave the whole country right to food, but it is not implemented here,”he said.

Building on the rights-basedparadigm that the Congress Party has been working on for the last decade, Mr.Gandhi told the people that they will now be given the right to shelter,health, medicine and pension.

“They make big promises and donothing. There are millions of jobless youth in the state. You have been stuckfor the last 30 years. The Congress Party will create millions of employmentopportunities for the youth of the state,” he said, adding that theCongress-led UPA government has already started work on manufacturing corridorsthat will help achieve this objective.

Elaborating on the CongressParty’s ideology of working with love, brotherhood andtaking everybody, Mr. Gandhi said the party believes in progress where theindustrialists and the poor are equal beneficiaries.

“The CPM has a 70-year oldideology. Countries around the world, including Russia and China, have debunkedthe communist ideology. On the other hand, BJP wants to give all the nation’smoney and resources to a few industrialists and forget the poor. They makepeople fight among each other. It is only the Congress Party that takeseverybody along and believes in partnership between industrialists and poor,”he said.