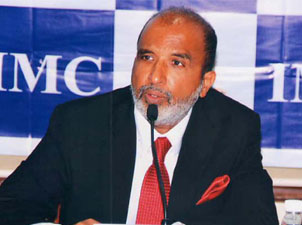 The falling rupee has raised serious concerns about the state of India’s economy. The woes being faced by the Government at the Centre has shaken the global faith in India’s growth story, with FIIs and investors having second thoughts on their investments in the country.

The Government’s reaffirming commitment towards the nation’s growth story and allaying fears of India staring at an economical and financial crisis, Sanjay Jha, National Spokesperson, Congress (I), spoke on a `A Defining Decade-Why India’s Growth is Unstoppable’ on 22nd August.

Shailesh Vaidya, President, IMC said, “The Indian economy is currently facing tough times. Factors like high social sector spending, a fiscal deficit amounting to 5% of the GDP using the backdrop of the global financial crisis, a farm loan waiver, besides high minimum support prices to farmers, all combined to weaken our fiscal position and stoke food inflation affecting the Aam Aadmi the most.”

Jha exclaimed, “India is a young democracy, vibrant in nature and a radically transformed country. Today India is a part of the global think tank. No international agenda is complete without India on it. And that in itself is a big achievement. The last ten years have seen us opening up sectors like telecom, retail, pharma, education, healthcare and we grew at a time when most economies were languishing during the financial crisis of 2007.”

Admitting to concerns about the falling rupee and its statutory effect on the Indian economy, he added, “The problem of the rupee falling drastically is partly global and partly domestic. The recovery of the US economy is the main reason for the rupee’s woes. Though the US-Euro zone recovery is bad in the short term, it holds lot of promise over the long term. Unemployment rates are declining and the $4 trillion that went into the emerging markets is now finding its way back home. On the domestic front, the gap between imports and exports is widening. Gold and oil imports are critical elements in our import bills, which need to be controlled.”

The other features that are symbolic of the India Growth story with an eye on the hurdles being faced, he said, “India is the third largest country in the world in the Purchasing Power Parity scales. India is in a cycle of change. Our middle class of 350 million people is larger than all of USA. A country that adapts well will succeed in times of crisis. India is a young. It is the thought process and the mind set that defines a nation. India is currently in a paradox. The corporate sector points to a paucity of talent while unemployment rates stay high. The need of the hour here is to maintain a balance in terms of quality by enhancing skills.”

“We are a parliamentarian democracy. The parliament has to function in order to move ahead. Coalition compulsion is a reality. However, the political system has to deliver. It cannot fight at the cost of stepping on the toes of the common man. Corruption needs to be tackled by framing stronger laws. As a citizen, if you want change, you will have to be politically active” said Jha.