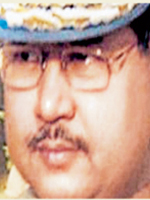 Ahmedabad, July 3: College girl Ishrat Jahan and three others were killed in a fake encounter in Gujarat in 2004 and there was no evidence that they were plotting to assassinate chief minister Narendra Modi, the CBI said in a chargesheet today.

Shedding light on an administrative underbelly that Modi rarely brings up while pitching his national ambitions, the agency charged seven policemen, including three IPS officers, with the crime. An eighth policeman was also among the accused but has since passed away. (See chart)

The CBI also said the fake encounter was a joint operation by Gujarat police and the Intelligence Bureau.

The agency has not yet booked Rajinder Kumar, the current special director of the IB in Delhi and the then chief of the intelligence wing in Gujarat. But the chargesheet has specific references to Kumar and, according to sources, a supplementary chargesheet is likely to level direct charges against him.

The chargesheet filed today in the court of an additional chief judicial magistrate did not book any politicians but the supplementary document may name some, CBI sources in Delhi said.

The BJP sought to seek cover behind the needle of suspicion at Kumar, saying he reported to the Centre and the Manmohan Singh government had taken over in Delhi a month before the fake encounter. ( )

But the party did not explain how the accused police officers in Gujarat continued to get promotions while Modi was in power. Modi rarely refers to the chilling incident in his speeches. The state started taking action after courts began piling pressure in various encounter cases.

The CBI had also told the high court, which is monitoring the Ishrat case, earlier that the state administration was not co-operating in tracking down a senior officer who has been declared an absconder.

The chargesheet does not go into the antecedents of Ishrat and the others as the high court did not seek the information. But CBI sources ruled out her involvement in terror activities and said she was accompanying Javed Sheikh to Ahmedabad as he was her part-time employer.

The chargesheet, however, made it clear that the CBI found no evidence that the suspects had gone to Gujarat to kill Modi. “During our investigation so far, nothing was found which suggests that three men and Ishrat came to kill the chief minister,” it said.

The CBI chargesheet details how Ishrat, a 19-year-old student from Maharashtra, Javed Sheikh, Amjadali Akbarali Rana and Zeeshan Johar were killed on the outskirts of Ahmedabad on June 15, 2004.

The conspiracy, the chargesheet says, was hatched by then joint commissioner P.P. Pandey, DIG D.G. Vanzara and Kumar who was then posted as joint director of the Subsidiary Intelligence Bureau (SIB) in Gujarat.

The chargesheet said Rajinder Kumar was “actively involved in the entire operation, from organising prior custody of the deceased, keeping them in illegal confinement and finally killing them”.

Investigation is going on against three other IB officers — P. Mittal, M.K. Sinha and Rajiv Wankhede, it said.

The chargesheet said deputy SP N.K. Amin and inspector Tarun Barot had taken Ishrat and Javed into their custody on June 12 from a toll booth at Vasad in Anand district with the help of M.K. Sinha and Rajiv Wankhede of the IB.

The other two were also brought to Ahmedabad before the encounter was staged and were kept at separate locations, it said.

Blindfolded, the four were taken to the encounter spot near Kotarpur waterworks on June 15, 2003, and killed in cold blood, the chargesheet said.

Amin, Barot, Anaju and Mohan Kolasawa, the police commando guarding Vanzara, made them stand near the road divider and fired at them, the chargesheet said. Kolasawa has since died.

Officer G.L. Singhal, on the instructions of Vanzara, collected a bag of weapons — two .38 revolvers and two AK-47s — from the SIB. Those weapons were planted on the four bodies.