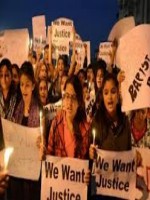 “When a movement is happening, it is sometimes hard to know you are at the epicentre,” says the younger brother of the Delhi bus gangrape victim who continues to battle for her life.

Ironically, the 19-year-old adds, nobody lets you forget it either — not the protesters, not the eager internet rumour-mongers, not the politicians, not the police and certainly not the media. In the midst of all, their only concern is a woman who only partly knows the extent of her injuries but senses the worst as the buzz around her grows.

It’s been a week since the family has been at the bedside of the woman at Safdarjung Hospital. Since then, from the floor of Parliament to the doors of Rashtrapati Bhavan, the story of their tragedy is the only thing they have been hearing.

“It is like the life we had a week ago never existed. Every day is now passing by in a flash. When I switch on the TV or log on to a social networking site, I see these emotional outbursts about Damini, Amanat, Nirbhaya (the names some media organisations have given the victim). It’s hard to digest that this is my sister they are talking about,” says the brother.

The first time he saw a pseudonym flashing on TV, he says he raised the issue with doctors and some police personnel. “I thought the channel in question had got my sister’s name wrong, because they said ‘Damini’s condition is deteriorating’ — they addressed her like that. I was reassured from the first day that our names, my sister’s name would not come out. I was furious,” he says.

He has since learnt the ropes, even the terms for it. “Somebody explained to me it is a phenomenon known as personification. I don’t like it, but they say she is the face of a movement,” he says. However, the Net barrage was something he couldn’t take — he has blocked his Facebook account.

“Every two hours, there is a new rumour. On social networks, celebrities and many friends flash her obituaries every night. For them it is just an online status they correct in two hours. At the same time, media channels say she has had a two-hour conversation, she has walked, she has smiled, she has hugged UPA chairperson Sonia Gandhi,” he says.

Last Friday, he saw claims on a TV channel of his sister having “taken a few steps, with brother’s help”, and “walking for the first time after the incident”. She was actually vomiting and complaining of a new abdominal pain that day.

“That night, my mother and sister hardly slept. It was a long and bad night for us, and TV channels were flashing that she was on her feet. I was tired and angry,” he recounts.

On Sunday, as the protests over the rape turned violent in Delhi, the family faced another pressure. Even as the victim went through one more operation, her brother says the police approached them.

“They told us more than 80 people had been injured, that people were getting violent in my sister’s name. They wanted us to make an appeal for peace. We wanted the movement to continue, but we did not want violence,” her brother says.

Towards the evening, when she was brought back to the ICU after her surgery, her father finally conceded to the demand. The father’s appeal to “Please help the police in maintaining law and order. Pray for my daughter, vandalism can serve no purpose”, rang out through media channels late on Sunday night.

A day later, the father does not want to interact with the media, despite repeated requests. “My father is scared that a wrong message has gone out. It seems like we don’t want the protests. We are suffering so much, why should we be against the movement? Now, he has decided against speaking to the media. There were more requests from the police, but we told them we don’t want to risk it again,” the brother says.

The flood of relatives and neighbours has not made things smooth either. “People want to know what she said, what she wrote in notes, how long she had known her male friend, who was accompanying her. Relatives want us to ask doctors if she will be able to get married and have children. My parents have become tired of answering questions,” he says.

Politicians have gone so far as to seek a meeting with the girl. “There is a risk of infection, we have said that repeatedly. But the requests continue to pour,” a senior administrative official at Safdarjung Hospital said.

While some politicians paid solitary visits, others have been calling the family and landing at the hospital every day. “They are protesting outside the hospital, calling us at odd hours, telling us they will pay us for her medical treatment. Each one speaks to the doctor, gets a new update, and calls us. While we appreciate the support, it gets scary sometimes,” the brother says.

Meanwhile, the family’s efforts are concentrated on keeping the victim as guarded from the hue and cry as possible. While she wants the accused to be hanged, the brother says, she is also scared.

“She does not know her intestines have been removed. She doesn’t even know the extent of the public outcry,” says the brother. “Even when her friends or relatives come to visit, she asks us how much they know. When she hears of politicians coming, she gets scared. She keeps asking my mother if she has told anyone what happened.”